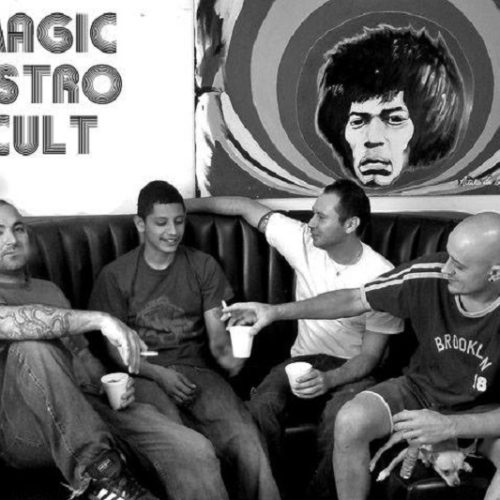 Deep in the heart of McKinney, Texas, there is a beat down old warehouse on the wrong side of the tracks. Inside its walls, a band called The Magic Astro Cult is cultivating a sound style all their own. They are a dedicated group of musical tramps, practicing to the brink of exhaustion. The sound produced in this nefarious neighborhood is both engaging and dynamic. It is Rock-n-Roll in its most primal and unforgiving state. The attitude that has become quintessential to this outfit has been the trust these musicians have in each other and the positive musical vibe that reverberates throughout their intentions. Deeply haunting and mesmerizing, their live performances are becoming that of street style myth. As for a three word description of this band, all one can say is unique, inspiring and mysterious. The band has described their sound as “Sexy Music,” a fitting testament to its laid back grooves and ambiguous sexual innuendos that resonate in the lyrical content.

Forged through endless rehearsal nights and exploratory altered states, The Magic Astro Cult is styling a fresh new sound. With a high energy live show, this band has seen its share of formidable stages and become comfortable to both packed houses and festival atmospheres. The Magic Astro Cult has seen band members come and go and suffered the untimely deaths of 2 core members in its early years. Although beat down emotionally from the passing of their friends and band mates (Mark Barbosa, Eli Galvan), the band kept itself together and gained strength in its resolve.

Guided by what the band calls “the spirits,” a term loosely referring to Mark and Eli’s undeniable work ethic and love for fun times, they have given their allegiance to “the sound.” The sound is a mixture of classic rock rawness with progressive, experimental, and alternative rock motives. The wild antics seen both on and off stage pay tribute to the “Glory Days” of Rock n Roll. Their live shows enhance the same dangerously sexy essence that their studio sessions are only limited to.